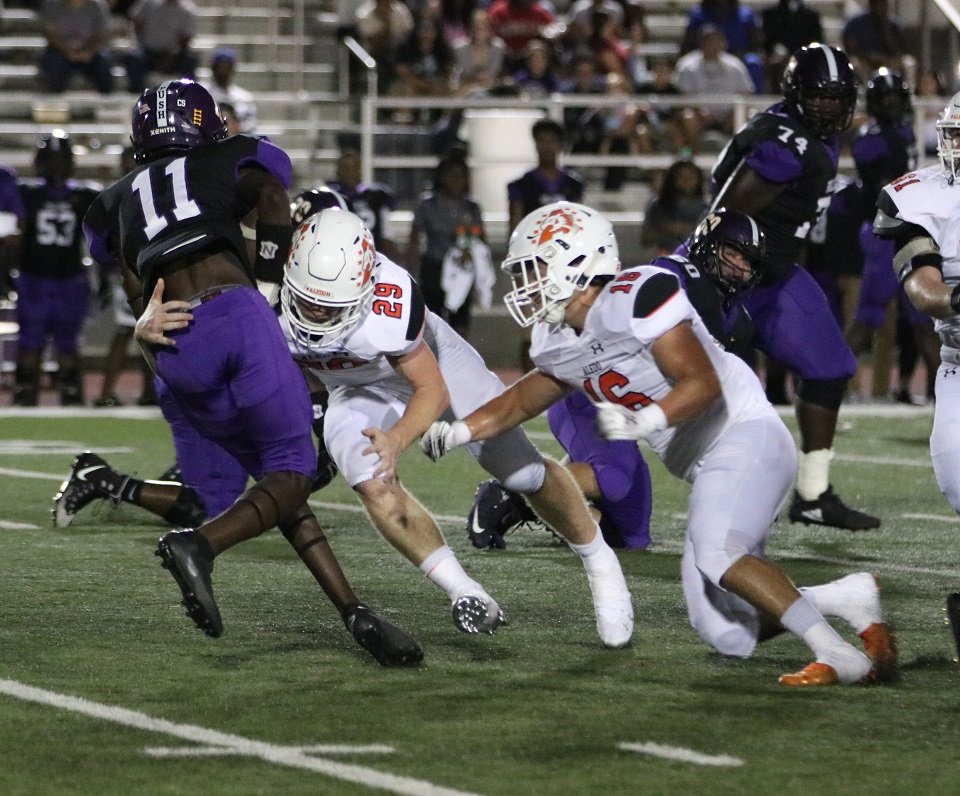 Aledo turned early turnovers into touchdowns and never looked back as the Bearcats ran past the Everman Bulldogs, 42-13, Friday night in a District 5-5A, Division II contest at Everman High School.

The Bearcats’ defense came up with five turnovers in the game, the first three which led to touchdowns.

“We played pretty dang well on defense,” Bearcats head coach Tim Buchanan said. “We tackled well, and we tackled that big ole quarterback (Juan Davis) well. That is what we needed to do.

“I am proud of how hard the defense played, and our defense kept us in the game and got the offense the football several times. I like the win, but I did not like all of the mental mistakes we made throughout the entire game. We made too many mental mistakes.

“But I am happy with the win and happy for our kids.”

With the offense struggling early, the Bearcat Black Shirts not only kept Everman off the scoreboard, but gave the Aledo offense three good opportunities by forcing three first-half turnovers, which all turned into touchdowns.

The first TD came when Caden Anderson picked up a fumble at the Everman 12. Three plays later, Jo Jo Earle lined up in the backfield and drove the pile into the end zone from three yards out with 1:06 remaining in the first quarter.

Micco Little booted the extra point for a 7-0 lead.

An interception by cornerback Collin Johnson at the Aledo 32 set up the next Bearcats’ score.

Matt Tague carried the load in the seven-play, 68-yard touchdown drive with four carries for 32 yards with his final carry bringing the ball to the hosts’ 1. On the next play, quarterback Jake Bishop did the honors with a one-yard run to pay dirt with 9:06 left in the second period.

Little added the PAT to increase the Bearcats’ lead to 14-0.

The Bearcats’ secondary struck again when B.J. Allen snared a pass from Everman quarterback Juan Davis at the EHS 28.

On third down and two from the Everman 22, Bishop lofted a pass toward the left pylon on the goal line where Money Parks elevated to catch the pass at the EHS 1. Two plays later, Earle went untouched off right tackle into the end zone.

After forcing a Bulldogs’ punt, Aledo took over at its own 40 with 1:45 remaining in the opening half. Bishop completed a seven-yard pass to Little to move the chains, but ran into trouble after throwing consecutive incomplete passes.

On third down from the hosts’ 42, Bishop went for broke, throwing the ball deep to a streaking Parks, who cradled the aerial after easily beating single coverage to complete a 58-yard TD play with 1:00 left in the half.

Little’s kick gave the Bearcats a 28-0 lead, where it remained at the half.

Bishop completed six of 13 passes for 112 yards and a TD in the first half, with Parks catching three passes for 92 yards and a score. Tague led all Bearcat rushers with 41 yards on seven carries.

Everman, after receiving the second-half kickoff, put together a 10-play, 75-yard drive that ended on a 28-yard touchdown pass from Davis to receiver Nick Bickems. The drive took 6:13 off the clock, and Esaj Romero added the PAT to cut the Bearcats’ lead to 28-7.

Everman joy, however, was short lived. Aledo came back with a 10-play TD drive of its own, marching 61 yards and scoring on a five-yard blast up the middle by Earle, who looked like he was shot out of a cannon as he bolted across the goal line with 1:00 remaining in the third quarter.

Little’s PAT increased the lead to 35-7.

As they did in the first half, the Bearcat Black Shirts forced another turnover that led to a score.

Everman had a third and 1 from the Aledo 1 but fumbled into the end zone where a hustling Weston Reese recovered the pigskin.

It took two plays for AHS to find the end zone. On second and nine from the AHS 21, Bishop fired a long pass to the left sideline where Earle caught the ball in stride, juked a defender at the Everman 35 and outran another defender to the end zone with 8:00 left in the game.

Little’s boot increased the lead to 42-7.

Everman closed the scoring on a 29-yard TD run by Jayvion Lenard with 14 ticks left on the clock.