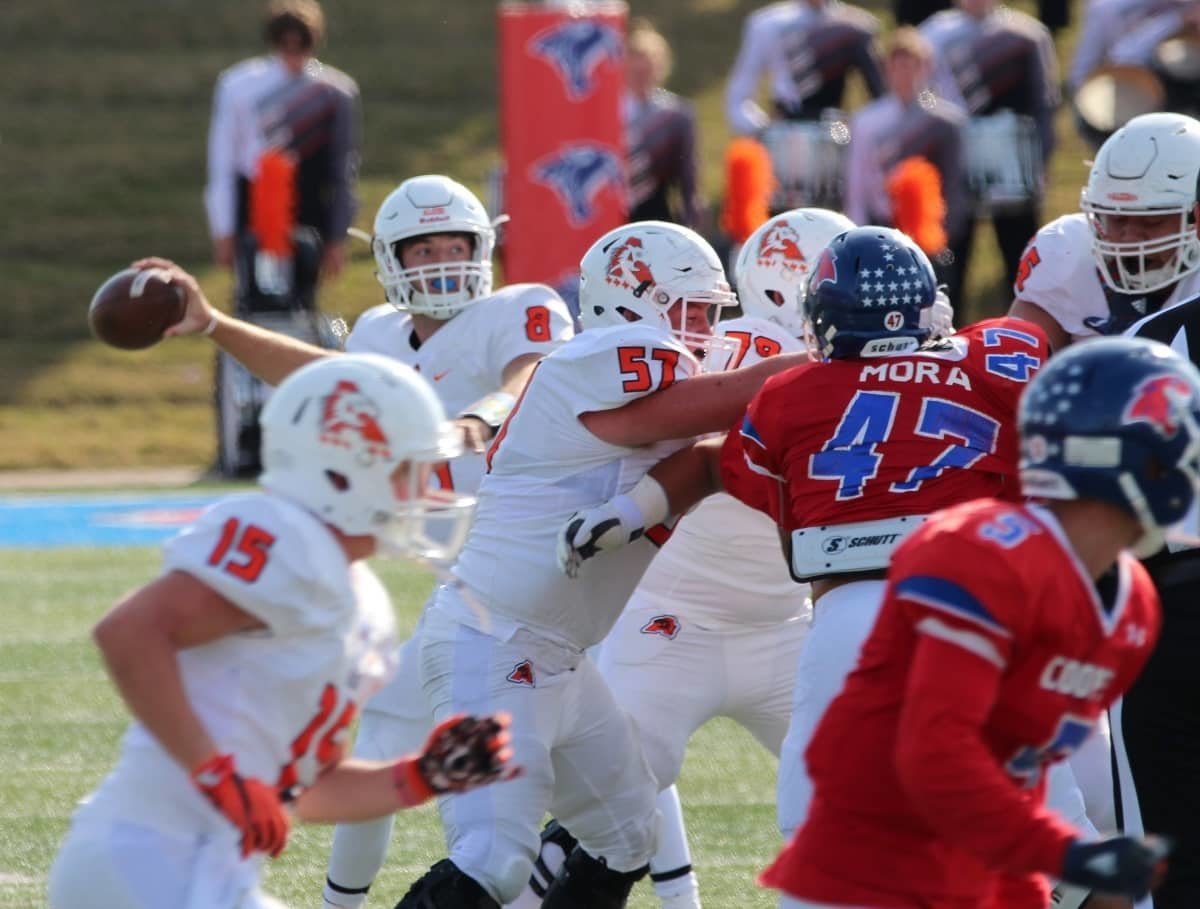 It was business as usual for the state-ranked No. 1 Aledo Bearcats Friday afternoon in a Class 5A, Division II regional semifinal at Shotwell Stadium in Abilene.

The Bearcats scored early and often on their way to a convincing 56-35 victory over the Abilene Cooper Cougars as Aledo advances to the Region I final (state quarterfinals) for the fourth year in a row and seventh time in the last eight years.

Aledo reached the end zone on its first four possessions.

After forcing a Cooper three and out to begin the game, Davis advanced the ball early in the drive with a 19-yard gain on a keeper, and on the next play found receiver Logan Peterson wide open down the right sideline as the senior stumbled to the Cooper 10.

It appeared Cooper had stopped the Bearcats after Davis’ pass to receiver Hunter Rosson was stopped at the Cougars’ 7. But Cooper was flagged for a face mask penalty, giving Aledo the ball first and goal from the 6.

Two plays later, James Williams, a defensive tackle who plays fullback on offense in short-yardage situations, had his number called as he took a handoff and rambled over the goal line for a two-yard touchdown run.

Quinn Davis booted the extra point to give the ‘Cats a quick 7-0 lead.

After forcing a second Cooper punt, the Bearcats found the end zone again, but this time it took just two plays. On second and three from midfield, Davis fired a deep pass to speedy receiver Logan Bridges, who ran under the pass on a crossing pattern and easily beat single coverage to complete a 50-yard touchdown play.

Reed Vierling booted the extra point, and with 4:27 remaining in the opening quarter the Bearcats extended their lead to 14-0.

Again the ‘Cats forced Cooper to punt, and once again took just two plays to reach the end zone. After an incomplete pass, freshman tailback Jase McClellan took a handoff and was lost in a pile off left tackle. But McClellan emerged from the pile, cut quickly to his left and was gone, outrunning three surprised Cooper defenders to complete a 65-yard TD run.

Quinn Davis added the PAT, and with 3:20 left in the first quarter Aledo built a 21-0 lead.

Cooper managed to earn its first first down on the Cougars’ ensuing series, but the success was short lived as Aledo forced another punt.

The Bearcats needed just three running plays to cross the goal line. McClellan carried for 55 yards on first down to move the ball to the Cooper 22. Senior tailback Donnie Evans carried next for seven yards, and his number was called again on second and three from the Cooper 15.

Evans took a handoff off left tackle, made two quick cuts and found an opening to score on a 15-yard sprint with 1:41 left in the opening period.

Vierling tacked on the extra point to increase the Aledo advantage to 28-0.

After the teams traded punts, Cooper, paced by a 64-yard pass completion from quarterback Austin Smith to 6-5 receiver Myller Royals, finally got on the board. The drive stalled, and placekicker Jamie Pogue salvaged three points with a 26-yrd field goal to cut the Bearcats’ lead to 28-3.

Cooper forced Aledo to punt for the first time, and aided by a pair of defensive holding penalties, marched the ball to the Aledo 12 before settling for a 29-yard field goal by Pogue to cut the Bearcats’ lead to 28-6 with 1:28 remaining in the second quarter.

Just before the half ended, Aledo put together a seven-play, 76-yard drive to add another score. Senior tailback Michael Jordan converted a third and one with a two-yard run, and later a Davis pass to Bridges for eight yards moved the ball into Cooper territory.

On the next play, Davis found Bridges again on a play that looked similar to his previous TD catch. On the play, Bridges lined up on the right side but ran a crossing route toward the left side of the field. He ran past two defenders and caught the pass on the run to complete a 44-yard touchdown play.

Quinn Davis booted the extra points as Aledo took a 35-6 lead at the half.

Bridges caught seven passes for 134 yards in the opening half and McClellan rushed twice for 120 yards as Aledo racked up 347 total yards in the first 24 minutes.

Davis completed 10 of 17 passes for 161 yards and two touchdowns.

The Bearcats stretched their lead late in the third quarter.

The Bearcats extended their lead to 42-6 with one minute left in the third quarter. Davis had thrown a 37-yard TD pass to a wide-open Rosson, but that score was called back due to a holding infraction on AHS.

However, on the next play, Davis threw deep again. This time Bridges raced past a pair of defenders and cradled a perfect Davis offering for a 47-yard touchdown that stunned the home crowd. Vierling added the PAT.

Cooper came back to life on the ensuing kickoff when Terreon Paige returned the kick 93 yards for a touchdown with 46 seconds left in the third period. Pogue added the PAT to cut the Aledo lead to 42-13.

Cooper forced a punt and scored again early in the fourth quarter on a 63-yard pass from Smith to receiver Tyrees Whitfield. Pogue added the PAT to cut the Bearcats' lead to 42-21.

Aledo came back to quickly match the score. Consecutive rushes by Jordan for a combined 36 yards moved the chains before McClellan took the next three carries, scoring on his third consecutive carry from nine yards out off left tackle. Quinn Davis added the PAT to increase the AHS advantage to 49-21.

Copper followed with an 85-yard TD pass from Smith to Aaron Jonas. With 9:24 left to play, Pogue added the PAT to cut the lead to 49-28. Ironically, on the play before, Smith connected with Royals on what appeared to be a 75-yard touchdown pass, but the score was called back on a holding penalty.

The Bearcats finished their scoring on an 11-yard touchdown run by Jordan, who lowered his shoulder at the Cooper 1 and blasted through two defenders and into the end zone. Vielring's kick extended the lead to 56-28.