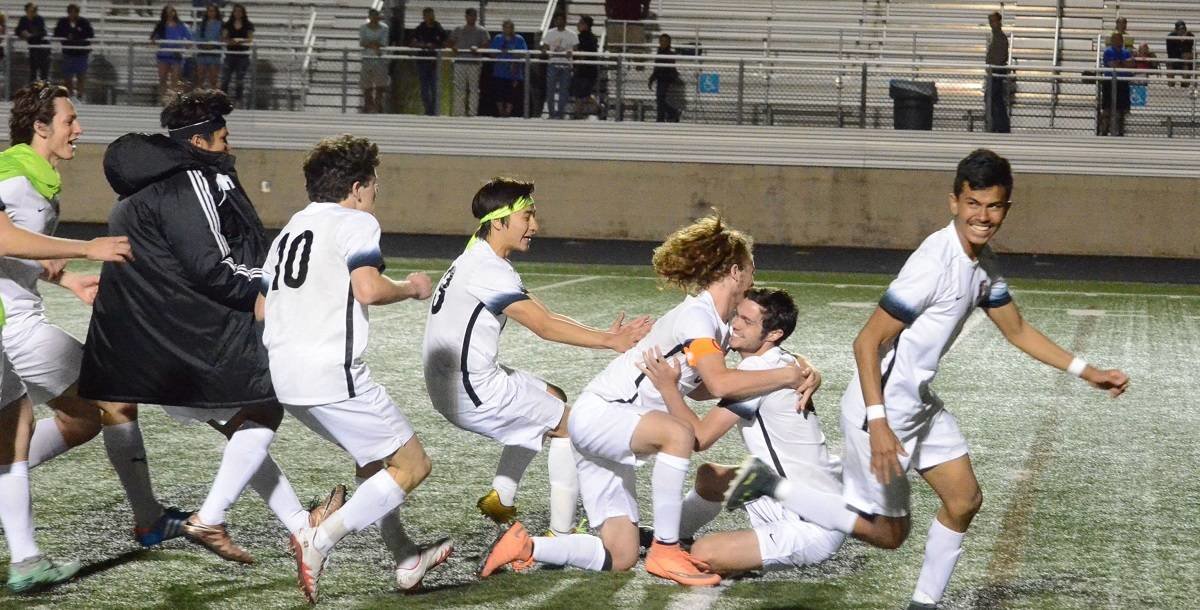 Both Aledo High School soccer teams won in their respective area-round playoff matches on Friday and both will advance to the regional quarterfinals.

Aledo senior goalkeeper Caleb Hill came up with three diving saves in the penalty-kick-style overtime shootout to lift the Bearcats to a 2-1 victory over Fort Worth Arlington Heights Friday night in a boys' Class 5A area-round match at Bearcat Stadium.

"We watched film on them and had a pretty good idea where they wanted to shoot the ball (in the shootout)," Hill said. "Coach Vierling did a good job of preparing me for this, but the main thing was I just stayed calm. It is a mental game at that point."

The Bearcats won the shootout, 3-1. Max Owens scored the first Aledo goal on the first kick, but Heights tied the shootout, 1-1, on its second shot of the shootout. Neither team scored on its third kick as Hill had made two brilliant, diving saves.

Aledo took a 2-1 lead in the fourth session of the shootout on a goal by Alvero Huerta-Martin. On Heights' fourth kick, Hill once again stretched his long body almost parallel to the ground to make a huge save.

The next Aledo shooter, Noah Hill, clinched the win when he deposited his shot in the back of the net to tip off a celebration from his teammates and the largest home crowd this season.

After a scoreless first half, the Bearcats took a 1-0 lead on a header from inside the box by Danny De La Cerda. But less than five minutes later Heights tied the game at 1-1 on a header.

Heights kept the pressure on in front of the Aledo net, and twice in the second half the 'Jackets had golden opportunities to score. But on both occasions Aledo defender Mickey Maloney booted the ball away from the open net to end the threats. Heights also missed on a pair of headers in front of the net - both sailing over the cross bar - the second coming with 10 minutes left in regulation.

With 3:13 left in regulation, Aledo senior Tanner Van Curen's header flew over the cross bar as that represented the last scoring chance for either team in regulation.

Hill came up with a jump save and two diving saves in the 20-minute overtime session, and Heights' goalkeeper also made a big save late on a rebound.

That set up the exciting ending in the shootout.

The win advances the Bearcats to the regional quarterfinals. Aledo will face Wichita Falls High School at 3 p.m. Tuesday at Ram Stadium in Mineral Wells.

Huddleston put the Ladycats ahead for good with a goal almost six minutes into the match. Her goal was from 20 yards and was assisted by Brooke Jones.

Just four minutes later, Laughley took a pass on the fly from Huddleston, split two defenders and scored on a breakaway for a 3-0 cushion that seemed to dampen the spirits of the Lady Rebels.

Aledo added two more goals for a 5-0 lead to close the first-half scoring as Huddelston scored from 35 yards and Thrasher added a goal on a free kick.

Aledo junior goalkeeper Makenzie Covington came up with a pair of diving saves in the first half to keep Richland scoreless.

Huddleston earned her "hat trick" a little more than five minutes into the second half on a goal assisted by Jones. The Ladycats closed the scoring when Laughley fed Jones for Aledo's seventh goal of the match.

Richland's last opportunity to get on the board - with 4:30 left to play - was thwarted by another diving save by Covington.

The Ladycats will move on to the regional quarterfinals and face Denton High School.

AHS notes: Chisholm Trail swept Aledo in diamond sports played Friday night at Aledo High School. The Ladycats softball team fell, 1-0, while the Bearcats baseball team took a 3-0 loss. Both will be back in District 6-5A action on Tuesday at Saginaw. Also, in Austin at the prestigious Texas Relays, Aledo freshman Gracie Morris won the girls' 1,600-meter run.

Aledo senior forward Cameron Huddleston fires a shot that would end up in the back of the net for the first goal of the Ladycats' 7-0 victory over Richland Friday afternoon in an area playoff match at Northwest ISD Stadium. Huddleston finished with three goals and an assist. Photo by Tony Eierdam